During the past five years we have ringed more than 27.000 birds of more than 150 species at Muraviovka Park, which produced more than 5000 local re-traps. However, long-distance re-traps of our ringed birds are still an exceptional rarity. One of our Long-tailed Rosefinchs was captured by Chinese ringers at Nenjiang (see here), and a Rustic Bunting was found near Haigang (see here). Now we received our first recovery from South Korea, a real Christmas present: a ringed Olive-backed Pipit Anthus hodgsoni was photographed at Ansan-si 16th of October 2015, and luckily most of the digits were readable, but unfortunately not all. This bird was ringed between 18th of September and 13th of October 2015 at Muraviovka Park, and was now re-sighted 1375 km to the south, only some days or weeks after ringing. Most likely, the bird was still on migration and has not yet reached its wintering grounds. This record shows the impressive possibilities of digital photography - even small rings of Passerine birds can be recognized, to fill more and more gaps in the knowledge regarding the East Asian flyway.
Big thanks to the observer Hyeong-Ji Kim and Jong-Gil Park, as well as Sergei M. Smirenski, Irina Kharitonova and the Bird Ringing Centre of Russia, and not forget to all the volunteers and ringers of this years´ Amur Bird Project autumn team. 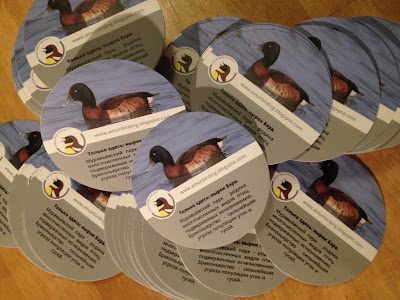