There have been only bad news regarding Yellow-breasted Bunting Emberiza aureola during the past years. Its global population dramatically declined, most likely due to overhunting in the wintering area (see Kamp et al. 2015). At Muraviovka Park this species is still a common breeder, with more than 200 breeding pairs in 2015. But land use changes and wild fires destroyed much of the breeding habitat.
However, record numbers of migrating Yellow-breasted Buntings have been noticed near Beijing this autumn, with flocks of up to 44 birds - read the full story here.
Luckily, we can confirm that 2015 was probably a good year for this beautiful species: we trapped the highest number of juveniles during our standardized autumn ringing program since 2011. So there is still hope for the Yellow-breasted Bunting! 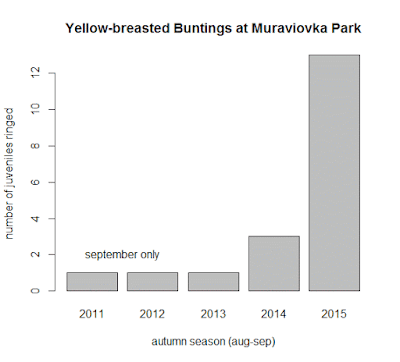 We will continue our color-ringing project next spring to learn more about survival and ecology, and hopefully we can start in 2016 to tag Yellow-breasted Buntings with GPS-tags to unravel their migration routes.